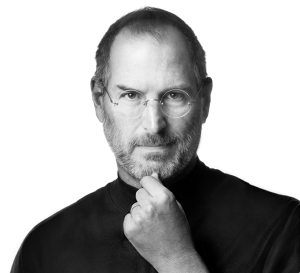 The only I don’t like about writing blogs is that people who don’t know me can read them and assume something about my beliefs.  Well, before, I would have written a long diatribe using words like, “I know you don’t know me,” or, “let me back up,” or, “while I do agree with that theology,” and more self-sacrificing phrases.  With this blog, I am just going to say, “take it or leave it!” (in a happy, loving way, of course).

This week we lost a visionary.  The world lost a leader, a top tier business man, a technology prophet, and more.  Steve Jobs was probably one of the greatest minds of the 20th and 21st century because he affected the way we interact and the way we live our daily lives.  Some of you might say that you don’t own any Apple products, and while that might be true, the person on the other end of that call, of that email, of that blog, etc. probably does.  Also, with more than 300 patents, Steve’s presence is sure to be known in more than just iPods and such.

But I am not here to defend his life – his time has passed and no longer our concern.  What I am writing about today is the incredible insensitivity, religiousness, and in some cases, deprecating joy surrounding the demise and presumed final destination of Steve Jobs.  Now if you are a non-Christian, just go ahead and go to http://www.apple.com/stevejobs because that is a way better and shorter read and this blog isn’t for you.

Why do we, fellow Christ wannabes (that’s a good thing, by the way), make statements highlighting the fact that a human being is getting what they deserve in hell?  When did we grow so callous and so comfortable in our mausoleums that we could sit in our Archie Bunker-esque spiritual recliner and figuratively applaud as another being with God’s very own DNA falls away from Him forever?  Steve Jobs accessed Heaven’s innovation and invention vault more than most any other Christian has in at least 100 years.  Why are we not asking God why we, who should believe in the creative power of God, did not invent the iPod? (I say “should” because most of us still see Heaven as a destination rather than a revelatory lifeline and our current citizenship)  Why are we not pushed beyond our comfort to look for that next person who needs to know not only salvation, but the awesome life that begins with Jesus?

I don’t know guys, wouldn’t it just be great for once for all of the Christians to weep in private over this man and yet in public pour love over his family in the same manner Jesus poured love over the people He came to bring back into a relationship with the Father (um, this would be us too, right)?  What would be the impact of honoring a man simply because of what he did and how he provided new and innovative ways of reaching out to the world rather than negating the gifts and destiny placed into his hands?  What would this world look like if we were known for our love rather than our extreme judgmentalism?

I’ll end on this.  I believe that as we learn to honor pre-christians for the fact that they were also created in the image of our Father, then we will change the way we treat even the “least of these” and truly begin to bring Heaven to Earth!

2 thoughts on “Steve Jobs and Heaven”

This site uses Akismet to reduce spam. Learn how your comment data is processed.